The Electric Universe
The four forces of physics

Two of these four forces act in the atomic core. One of them UNIFIES and holds matter together in the core (e.g. via fusion), the other force SEPARATES parts of the atomic core. It produces the radioactivity of e.g. uranium and thorium (table). The other two forces of these four forces act in the infinite space. One of them - gravity - UNIFIES and holds matter together e.g. it forms stars from huge clouds. It holds together stars, solar systems, binary stars, galaxies, clusters. The other force - the electric force - SEPARATES matter of celestial bodies and repulses winds, loops, flares and light years-long jets. The electrically ejected matter is formed to filaments via pinch effect. (see jets of Crab pulsar) 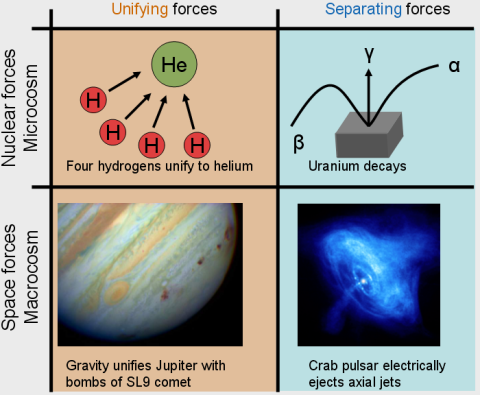 The attractive and repulsive forces in microcosm and macrocosm show the elegant simplicity and beautiful symmetry of the Universe. This was not understood in the 20th century. The main problem was, how could the Universe still have e.g. positive matter which should eject another positive matter as the Sun its proton-flares? Yes, positive and negative matter continually neutralize each other. But the sun-like stars continually produce new charged matter, too, e.g. negatively charged wind and proton-flares. They do it via 43 times quicker thermal motion of the plasma-electrons related to that of the protons Therefore, electron-jumps outwards are in average longer than those inwards. In addition to this thermoelement-effect, the solar photons and the solar neutrinos also push outwards the electrons to longer jumps but the ions to shorter ones. The solar surface is charged negatively. Neutron stars, cosmic rays and black holes have more violent electric functions.